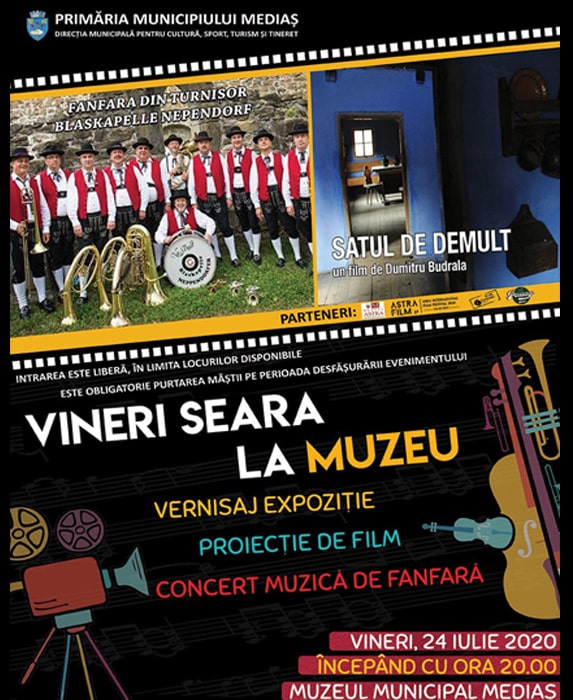 The series of events “Friday night at the museum” continues on July 24, starting with 20.00, in the courtyard of Mediaș Municipal Museum. Mediaș Town Hall, through the Municipal Directorate for Culture, Sports, Tourism and Youth organizes the third edition “Friday night at the museum” which begins with the temporary exhibition “Disasters that hit Mediaş in the last century”, a chronicle of major disasters and pandemics that affected the town on Târnava Mare, but also Romania or even the whole world in the 20th century and the beginning of the 21st century, until the current COVID-19 pandemic. Within the exhibition we can find photos that are part of various private collections and from the Archive of Mediaş Municipal Museum.

The evening continues on the rhythm of polka, waltz and promenade music with the Fanfare from Turnișor, a professional band, consisting of 12 instrumentalists, which presents itself as a continuator of the traditions of the German ethnic group, which promotes and keeps alive in this part of Transylvania.

The series of film screenings during the event continues with an exceptional film production, directed by Dumitru Budrală, entitled “Satul de Demult”. Named the winner of the Grand Prize of the second edition of the International Ethnographic Film Festival (FIFE) in 2014, the film is a documentary – a praise designed to preserve what is left of village life of yesteryear and retell the secrets of life of yesteryear. The film also offers an overview of the Astra Museum in Dumbrava Sibiului, an extraordinary museum that reproduces the traditional village.

We invite you to discover together the hidden and sometimes forgotten treasures and beauties of the Romanian village!